The number of homes sold via Canadian MLS® Systems fell 6.7% in June 2017, the largest monthly decline since June 2010. With sales having also declined in each of the two previous months, activity in June came in 14.1% below the record set in March.

June sales were down from the previous month in 70% of all local markets, led overwhelmingly by the Greater Toronto Area (GTA). Monthly declines were also posted in all surrounding Greater Golden Horseshoe housing markets, the Lower Mainland of British Columbia, Kingston, Montreal and Quebec City.

Actual (not seasonally adjusted) activity was down 11.4% on a year-over-year (y-o-y) basis, much of which reflected a significant drop in GTA sales activity. Nonetheless, half of all local housing markets recorded y-o-y sales declines. By contrast, Calgary, Edmonton, London and St. Thomas, Ottawa, Montreal and Halifax-Dartmouth topped the list of Canadian cities where home sales surpassed year-ago levels.

“Canadian economic and job growth have been improving, which is good news for housing demand,” said CREA President Andrew Peck. “However, it also means that interest rates have begun to rise, which may impact homebuyer confidence – particularly in pricier markets like Toronto and Vancouver where recent housing policies had already moved potential buyers to the sidelines. In lower priced markets, the effect of higher interest rates on housing affordability will be relatively muted. All real estate is local, and REALTORS® remain your best source for information about sales and listings where you live or might like to.”

“Changes to Ontario housing policy made in late April have clearly prompted many homebuyers in the Greater Golden Horseshoe region to take a step back and assess how the housing market absorbs the changes,” said Gregory Klump, CREA’s Chief Economist. “The recent increase in interest rates could reinforce a lack of urgency to purchase or, alternatively, move some buyers off the sidelines before their pre-approved mortgage rate expires. In the meantime, some move-up buyers who previously purchased a home before first selling may become more motivated to reduce their asking price rather than carry two mortgages.”

The number of newly listed homes slid 1.5% in June, led by a sizeable pullback in the GTA compared to record levels in April and May. A number of other markets in the Greater Golden Horseshoe also saw a pullback in new supply.

With sales down by considerably more than new listings in June, the national sales-to-new listings ratio moved further into balanced market territory at 52.8%. The ratio had been in the high-60% range just three months earlier.

A sales-to-new listings ratio between 40 and 60 is generally consistent with balanced housing market conditions, with readings below and above this range indicating buyers’ and sellers’ markets respectively.

The ratio was above 60% in fewer than half of all local housing markets in June. The majority of markets with a ratio above 60% are located in British Columbia and Ontario, but a number of Greater Golden Horseshoe markets have downshifted into balanced territory. The ratio fell below 40% in the GTA and Barrie.

The number of months of inventory is another important measure of the balance between housing supply and demand. It represents how long it would take to completely liquidate current inventories at the current rate of sales activity.

There were 5.1 months of inventory on a national basis at the end of June 2017 – up a full month from where the measure stood in March and the highest level since January 2015.

Months of inventory in the Greater Golden Horseshoe region are up from the all-time lows reached prior to the Ontario government housing policy changes announced in April 2017. For the region as a whole, there were 2.5 months of inventory in June 2017. While this remains below the long term average of just over three months, it is up sharply from an all-time low of just 0.8 months set in February and March.

Across markets in the region, months of inventory ranged from 1.5 months to 3 months in June 2017. As such, housing markets within the Greater Golden Horseshoe remain the tightest in Canada together with those on Vancouver Island and B.C.’s Lower Mainland. 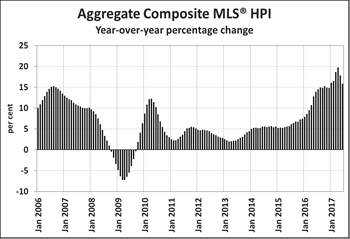 The Aggregate Composite MLS® HPI rose by 15.8% y-o-y in June 2017, representing a further deceleration in y-o-y gains since April.

While benchmark home prices were up from year-ago levels in 11 of 13 housing markets tracked by the MLS® HPI, price trends continued to vary widely by region.

Benchmark home prices in the Lower Mainland of British Columbia have been recovering after having dipped in the second half of last year. While y-o-y price gains continue to slow (Greater Vancouver: +7.9% y-o-y; Fraser Valley: +13.9% y-o-y), the trend appears poised to accelerate later this summer as price declines last year fade further in the rear view mirror.

Calgary benchmark prices remained slightly positive on a y-o-y basis in June (+0.6%), while Regina and Saskatoon home prices came in below year-ago levels (-0.7% and -3.1%, respectively).

The MLS® Home Price Index (MLS® HPI) provides the best way of gauging price trends because average prices are prone to being strongly distorted by changes in the mix of sales activity from one month to the next.

The actual (not seasonally adjusted) national average price for homes sold in June 2017 was $504,458, up just 0.4% from where it stood one year earlier.

PLEASE NOTE: The information contained in this news release combines both major market and national sales information from MLS® Systems from the previous month.

CREA cautions that average price information can be useful in establishing trends over time, but does not indicate actual prices in centres comprised of widely divergent neighbourhoods or account for price differential between geographic areas. Statistical information contained in this report includes all housing types.

The Canadian Real Estate Association (CREA) is one of Canada’s largest single-industry trade associations, representing more than 120,000 REALTORS® working through some 90 real estate Boards and Associations.

Further information can be found at http://crea.ca/statistics.